Over the last semester, my classmates and I built a virtual museum in the class Future Reality: Trends and Impacts in New Media which was taught by Prof. Allen. When work on the project began, the purpose of the museum was to create a place in which students could store and showcase their digital artwork. The class was about virtual reality and we wanted a way for everyone to do something in it despite their level of experience with 3D graphics or VR. But right away, we realized that the virtual museum could be so much more than a recreation of a traditional physical museum. A virtual museum is not a novel concept. Digital galleries have been around for a long time. Many large museums have digital extensions of themselves whether it be recreations of existing art and exhibitions or completely original artwork that can only be experienced in a digital medium. The point of creating something in a virtual space, to me, is not to replicate real life but to expand it. We don’t need to be constrained by reality.

The three main problems I saw with real museums that could easily be remedied through virtual reality are scale, physicality, and accessibility. A visitor to a virtual museum would not have to worry about the scale of an object on display. They would, hopefully, have the freedom to manipulate the object with complete disregard to the physical state of the object in real life. They’d be able to change the scale of the artwork or of themselves to see minute details with no problem. An exhibition would also not be limited to being in a room in a wing of an old building. A curator would be able to design complete worlds around the content created by an artist. At a point, the museum itself would become a work of art. A virtual space would also be accessible by pretty much anyone on the planet with an internet connection and a headset. They wouldn’t have to visit a physical location. Everything would be available at the click of a button.

As a team of people with little to no experience with 3D, VR, Unity or programming, we did our best to make sure the museum reflected the ideas of a virtual museum. While we were unable to give users the ability to interact directly with the objects in the museum, we were able to create worlds with things that could only be possible in a digital space. We completely ignored the building and created large open areas, some of which went on forever. For what we wanted, the museum was a success. But there was something we hadn’t thought of that a real museum did really well: create a space in which people could gather and discuss the art. This is where the virtual museum might be improved. What is the point in having a museum only one person can see at a time? Museums can be collections of art for preserving historical or religious artifacts but a more important role they have is creating physical spaces in which individuals can come together to experience and discuss the things on display.  Museums are meant to be social experiences.

The work being done here in the Future Reality Lab focuses on the importance of interaction and social experiences. A virtual museum could easily become a social platform for discussing art if we apply our lab’s research. People from all over the world could gather in one place regardless of distance. It would allow for a more diverse group of people to experience the art of a museum which would lead to richer experiences and greater discussions. A platform like this could create a community of artists, critics, and general museum-goers that would not be possible in any physical museum. The only barrier to entry for this would be having to purchase the technology needed to run the museum, but even this problem is being worked on in the lab as we look for cheaper, more accessible ways to get into VR.

A lot of work is required before our museum can get to that place, but I imagine it’s being worked on by others around the world. I envision our museum becoming something like a small-scale MMORPG game where people can walk around, see others, join in conversations, explore the different worlds created by artists, and make communities around those worlds. The idea, as it is now, sounds a lot like VR chat. Hopefully,  it doesn’t devolve into a bunch of Ugandan Knuckles asking “Do u know da wae?” 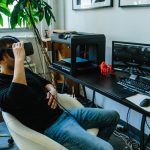