I’m going to keep my post short this week, a big project came in at work for a show happening a week from today… which means, I’ve got less than a week to make the interactive visuals… fun. But the point of this blog isn’t for me to complain… I’ve decided to use a new software to tackle this project and I wanted to give a quick intro to it.

The program’s called Notch, a real-time motion graphics, VFX, and VR engine. The interface is built around a node-based structure fairly similar to Nuke / TouchDesigner / Blueprints in Unreal Engine. I’ve come to really appreciate using the node structure in software I use — even though coding on a text editor allows for more freedom and granular approach to making visuals or setting up logic to a system —  doing the same thing with nodes also has its own benefits, especially when prototyping or working in realtime systems like Notch or TouchDesigner. With nodes, since you can usually visualize what’s happening at every step, it’s extremely helpful when debugging to be able to step through your project and see what values are being passed while you’re running your program / system / animation. It’s also nice to be able to easily rig up several versions and switch between them by connecting and disconnecting a few nodes. (On the downside, it can get really messy really fast if you aren’t careful with the placement of the nodes — there’s definitely been times when I get in a rabbit-hole with experimentation that the node map becomes so crowded I don’t even know what’s happening). On the bright-side, it highly encourages experimentation and messing around with values, just to see what happens to the data flow and also the overall animation.

I decided to use Notch because it has the workspace of a program that supports a 3D-environment, like Cinema4D or Nuke, but also has the real-time and node based interface, like TouchDesigner. On top of it, it has a timeline system like more traditional film editing programs, like Adobe Premiere, to lay out clips and cut together sequences.  The project’s going to involve a lot of particle/fluid/cloth simulation, which Notch has some beautiful features built-in, and also the ability to plug in a Kinect / Camera feed to drive 3D animations in real-time, to build in interactivity to the animations.

I’ve spent the last few days going through tutorials / teaching myself about the program, and I have to say it’s a REALLY fun program to learn. It’s extremely fun/easy to get a scene up and running that looks beautiful. Would highly recommend downloading the trial and playing around with it, even if you have no intention of buying it or using it in the long term. 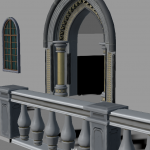 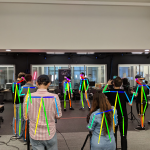