My Co-Evolution with the FRL
September 5, 2018byconnor

My Co-Evolution with the FRL

This week is the first week of my last academic year in the FRL. It’s been four years since I first started as a Ph.D. student, and it both feels like I’ve been here forever and like I just started yesterday. So, I’ve been thinking a lot about where we are, how we got here, and where we’re going next.

Our lab was much smaller then, both in terms of physical size and in terms of lab members. We weren’t even called the Future Reality Lab. However, we had the same vision back then that we have today: to push the boundaries and show the value of shared, social VR.

The first project that I worked on here was called ‘Octopus Rift.’ No, really, it was called that. Our vision was people sharing a fantastical environment where they could interact with procedural characters and creatures and explore their virtual world. The idea of physically shared, immersive VR was fairly novel, but as is the fate of many pun-based projects, it didn’t make it far past the initial pitch.

We took the key technology from the Octopus Rift, which was combining the 3DOF GearVRs with the 6DOF OptiTrack tracking system for (relatively) cheap, untethered tracking, and we turned this into Holojam, shown at SIGGRAPH 2015’s VR Village. We also simplified the interactions, as we found that the novelty of the system was interesting on its own! While it was a small sub-section of Emerging Technologies back then, the VR Village still had a considerable amount of content. And amongst all of that content, we made quite the impression as the only system of our kind. We were only showing Holojam for one day, but we definitely left our mark at SIGGRAPH that year. I’m not sure if all the demos I see OptiTrack run these days using our paradigm are a direct result of our efforts, but I like to think so.

Holojam ‘15, to me, was one of the most important pieces I’ve worked on at the FRL. Not only did it validate our beliefs that social VR had a special power which other contemporary VR lacked, but it acted as a springboard for pretty much every other project we’ve done at the lab since then. We took all the failures (there were many) and successes (there were many) and we continued to iterate, develop, and improve our system, always trying to push the frontier of delivering the largest shared VR experience possible.

Soon after SIGGRAPH 2015, we ran ‘Dia de los Holos,’ a short and fun project that took Holojam and added more interactivity, expanding into the realms of audio and haptic feedback. We made many great connections with artists, some of whom have continued to work with us to this day. Several other students joined the lab through the next couple years, and as our lab grew, we expanded our presence as a lab. We started running weekly VR meetups, we had projects shown at festivals and art installations, Holojam Inc. started up, and of course, we did plenty of research. Eventually, we outgrew our old lab and moved into our current location, and soon after we became the FRL.

At the same time, we watched the technology grow alongside us. Over those years, consumer VR really broke out into the market. The HTC Vive, the Oculus Rift, Sony’s PSVR, and several dozen iterations on the Google Cardboard model all became publicly available during that time. We experimented with high-powered computer backpacks, better 3DOF headsets, better trackers, AR headsets, different controllers, and much, much more, and it was always with the original goal in mind: push the boundaries on the possibilities of social VR.

In 2018, we produced CAVE, which supported 30 people in a shared VR environment at a time, far more than we had ever done before. Nearly 2,000 people saw it during the short span of SIGGRAPH. And while that number is impressive on its own, to me, it is absolutely astounding to compare it to our 4-person experience in 2015. Everything from the paradigm design to the hardware has radically evolved, and there are no signs of it stopping.

So, as I begin my final year here, I can’t help but look forward to what comes next — for me, for the lab, and for the world of VR in general. Let’s see where we go in the next year! 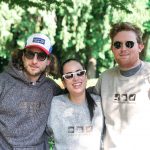 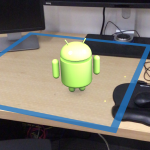