Learning how to draw again

Hey everyone! So, for the last several weeks I’ve been focused on one thing and one thing only: creating an environment for a user that allows them to pick up a piece of chalk and draw. That’s it. Sounds simple right? Not exactly. At least not for a relative newbie like me.

After many trials and tribulations I can finally say I’ve gotten my product to a semi-satisfactory form. Something that I wouldn’t be completely embarrassed to show my loved ones. I’ve gotten pretty much all the basic steps down. A user selects the shape they want to draw, the user selects the color of chalk they want to draw in, they draw however they see fit, then they see their results in the form of 3D model based on the color and shape they originally chosen.

But, it’s not perfect. Far from it. The actual drawing still feels very laggy. The chalk itself goes straight through the paper rather than stopping at it’s border, and sometimes I find random dots and lines being drawn even in places where the chalk does not touch. That’s obviously a problem. But, it’s a work in progress and I’m excited to move forward with it! 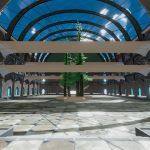 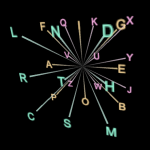