I’m going to take a break from talking about my research goals today, and instead focus on the thing that’s on our lab’s mind: SIGGRAPH!

If you are unfamiliar with SIGGRAPH, it is the largest annual conference focused on Computer Graphics. Unsurprisingly, as CG affects practically every industry today, you will see a very wide variety of people: artists, researchers, developers, directors, tech enthusiasts, coders… the list goes on and on. It is an insanely intense week as all of these graphics-lovers congregate to discuss the latest and greatest and show off their stuff. I’ve been to several SIGGRAPHs by now, each one amazing in its own way, and those of you who know me know that I have a deeper connection to the conference that predates my existence.

I’d like to share an experience from last year’s SIGGRAPH that inspired me, and has motivated my work over the past year. I had the privilege to work with Andrew Daffy and the Superbright team to create a project named Holodoodle. It started as a fun, collaborative game show (think VR pictionary), where people took on the avatars of cartoonish robots and drew crazy, 3D drawings. However, as we developed it, we found that the core fun of the experience was simply just coexisting with friends in VR as silly robots. We made Holodoodle more than just drawing; it became a VR party where people danced, laughed, and had all sorts of fun. In the middle of the exhibition hall for a technical conference, we created a dance party.

For many reasons, mostly just the nature of SIGGRAPH, running Holodoodle was exhausting. As a person who ran the backend tech, I had to be constantly focused and ready to address any technical issues that cropped up. I was on constant high-stress mode for the whole week. However, that stress became worth it once I started to see the people experience Holodoodle.

Hundreds of people came through Holodoodle. People who had never met played and danced and laughed together. Jim Blinn, one of the most important figures in Computer Graphics, danced ballet as a tall, pink robot. I had never seen anything quite like this, and it reminded me that this was the future of VR I had been so passionate about pushing forward.

One story stood out to me in particular. A participant, shy at first, found themselves dancing their heart out by the end of the experience. They came up to us after the event and told us that they were never much of a dancer, or particularly comfortable in similar social situations. But once they put on the VR headset and saw themselves as a whimsical, pink robot, they no longer cared about their previous self-impressions. All of the preconceptions with how they should act, those years of ingrained behavior melted away, and they could just experience pure and raw fun. Their life was permanently changed after Holodoodle.

I’ve kept that story with me, along with many others I heard at SIGGRAPH 2017. Whenever I’m stuck or unmotivated, I think about those stories. At the end of the day, the best outcome I can imagine for a Future Reality Lab project is that we made someone’s future better. I know with all of the hard work and dedication the team has poured into CAVE, SIGGRAPH 2018 will bring many more stories, stories of people who left changed by a new and beautiful experience.

And I can’t wait to hear them. 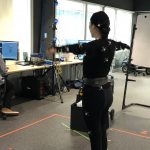 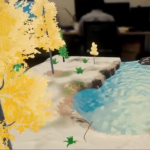