For the last week or so, I’ve been working with the Faceware software to create facial animations for Ayara for the final version of CAVE.

There were a lot of issues with our license and some with the software itself but after a few days of emailing Faceware, we got most of it sorted out and I was able to begin working on the animation.

Last week we re-recorded the clips of Ayara’s voice actress dubbing her lines. The performance was broken into 11 clips so the actress would be able to try each line multiple times. On playback, we realized that recording 11 clips was a mistake as during each recording, the position of the camera would change slightly. This meant that I wouldn’t be able to combine the 11 clips into one and create a single animation because the positions of the eyes, eyebrows, nose, and mouth could change drastically and the Faceware software wouldn’t understand it. So I am currently creating 11 separate facial animations which will take significantly longer than a single long animation. I have a few more left to do.

In the future, I think the best option would be to keep the camera recording even when the performer is between lines. This would allow the camera to keep track of the facial markers and we would end up with only one clip to animate. Although, this would require more rehearsal and prep time.

Another thing to try would be to place markers on the actor/actress’s face so I can more accurately track the performance and achieve more consistent results. 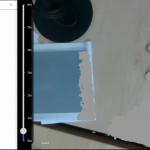 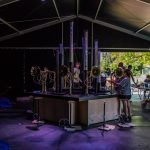