At this point, I have finished cleaning the mocap data and the facial animations for all of the characters, except for the 3rd scene for the monster. I have moved on to the “contact pass” for all of the animation. For this pass, I’m reviewing all of the animations for each character and making sure that in the instances where they touch themselves, each other, and other objects, they don’t penetrate the object cut but instead look like they are correctly touching that thing. In this part of the project’s pipeline, I’m using animation layers in Maya to modify the mocap data in a more traditional, almost keyframe-like, process. I can only modify one character at a time and the other characters need to be referenced into the scene. Referenced characters can’t be modified unless the changes are made to the originally referenced files. This is the only way I can work with all of the characters in the scene because importing all of them into the scene would create a file too large to deal with (the file I’m editing Mary in is already at 9.5Gb) and I’m certain there would be a lot of namespace issues that I don’t want to deal with.

In the picture you see here, I am using locators and parent constraints on Victor’s left foot to make sure that the foot makes contact with the ground and doesn’t slide. It’s a slow process but I am definitely enjoying it more than cleaning the mocap, this feels better and requires me to be a bit more creative in the way I get the characters to move. 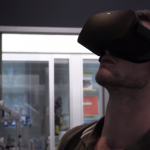